Coyote The coyote (Canis latrans), once strictly a western species, now occurs throughout the eastern United States. Coyotes began expanding their range into the Southeast in the 1960s, reaching northwestern Florida in the 1970s. In a 1981 survey, coyotes were reported in 18 of Florida's 67 counties. A similar survey in 1988 reported coyotes in 48 counties. They are most numerous in northern Florida, but their numbers appear to be increasing state- wide. The eventual occupation of the entire state is likely. The coyote is a member of the dog family, similar in appearance to a medium size shepherd. They weigh between 20 and 30 pounds, have pointed ears, a narrow muzzle, and bushy tail. Males tend to be larger than females. Pelts are usually grayish-brown, but occasionally black, often with a patch of white chest hair. When running, coyotes usually hold their tails at "half mast." Coyote tracks are narrower and more elongated than dog tracks. 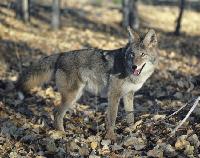 How can I protect my cat or dog from coyotes?

What should I do if I see a coyote?

You want to make sure the coyote knows they are not welcome. You can do this by making loud noises, throw rocks, or spray them with a garden hose. It is important that coyotes retain their natural wariness of humans.

Normally coyotes are timid and shy away from people. Although rare, coyotes have been known to attack humans. Most attacks resulted in minor bites and scratches to adults attempting to intervene in an attack upon a pet. Never leave unattended children in areas known or suspected to be frequented by coyotes.

What diseases or parasites do coyotes carry?

Distemper, hepatitis, parvo virus and mange. Coyotes can be infected with Rabies. Numerous parasites can live on a coyote including mites, ticks, fleas, worms, flukes and heartworm.

Where do coyotes take their kill to eat it?

Coyotes kill an animal because it is a food source and are very skilled hunters. They may attack fleeing animals from the rear, biting their legs or tail to slow them down. They most often kill by biting the throat, causing death by suffocation.

Coyotes usually take their prey with them to a safe place to eat. They may carry their prey up to 1 mile before consuming it. They do not leave much behind and tend to eat whatever can fit in their mouth. In some cases, they have even eaten the leather collar of a pet. For this reason, not much evidence or waste is left behind.